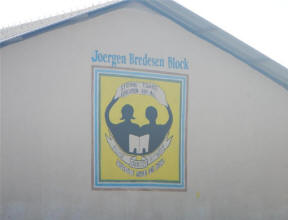 Yesterday I had the pleasure of participating in a Career Day as part of a Rotary function at Scanaid Senior Secondary School in Brufut village.  There were children from three other Senior Secondary schools present – SOS Children’s Village, Brufut Upper Basic School and Kotu Senior Secondary.

To the left is the Scanaid Senior Secondary School Crest

The Career Day was announced at the Fajara Rotary Club meeting that I attended last Friday evening – held at the Senegambia Beach Hotel.

The Career Day event brought together: 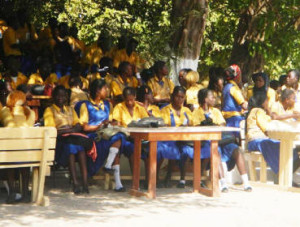 The day started with school children gathering under canopies in the courtyard of Scanaid Senior Secondary School. Each school assembled under their own tent or under the huge trees. The Scanaid students are pictured to the right under the shade trees.

Starting at 11:00 AM, there was a line up of students presenting: a drama – the story line, do not settle for menial employment; a singer who sang for the hungry and brought many to tears; a young girl who delivered an extemporaneous speech about raising voices in Africa and promoting change; and, a poet who wrote a poem about the pen being mightier than the sword.

Messages were strong – help the continent rise above the challenges of poverty and war and dream, dream BIG. Photos from the event: