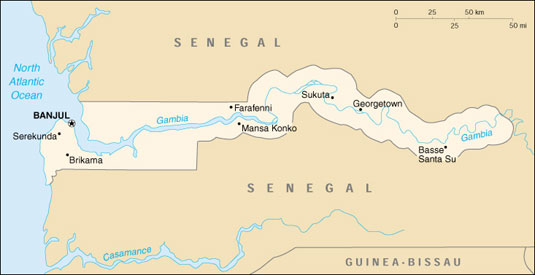 The Gambia, also called Gambia, is the smallest country on the African mainland. Among African countries, only the Seychelles, a group of islands off the eastern coast, cover a smaller area. The port city of Banjul is the capital of The Gambia, but Serrekunda is the largest city.

The Gambia is a largely agricultural country, and its people are poor. Peanuts, the main crop, are grown largely for export.

Tourism also helps the economy.  Beaches along the Atlantic coast draw visitors to The Gambia, as does the rich bird life along the Gambia River.