The list for Monday keeps growing and as the departure date gets closer the “to do” list becomes even longer. It looks like this so far:

There have been so many new people this trip that actually getting connected beyond the greeting and “hello” is difficult.

I have one tentative meeting with the Abubacar Bah, new Headmaster at Kudang Senior Secondary School to discuss the outcome of his community meeting.  He’s to draft a list of school project priorities.

When we first met, he had told me about the many issues he would like to address and seek funding for – I told him he needed to obtain community input and to bring a priority list to me. After that, we could discuss further development of a proposal. This is a new Headmaster and he brings with him the motivation and zeal newness brings. I liked his enthusiasm and want to see him take the necessary steps to make something happen at the school. It is the persistence and dedication to the students that usually brings out the extra-ordinary from the ordinary. It is too often that school heads maintain the status quo.

This trip I met several new Principals and Headmasters that appeared motivated. At three of the schools we frequent every year both the Deputy Headmasters and the Headmasters have been replaced. The new appointees did not have a record of our ever being at the school. There was no file, nothing.

Essa appeared quite distressed to learn that not one of the three principals we had been relating to (for 4-5 years), exchanged information with the incoming Headmasters. We were told by the Kudang Headmaster to report our frustrations to the Regional District Office, Mr. Gibril Bah. Because of our time limitations we could not pay a personal visit. Instead I will write a formal letter seeking his assistance. I will ask Essa to follow-up my letter with a telephone call to the Regional Office.

The issues that were on the mind of the new Headmaster are as follows:

The school is fed by 17 communities. A observation tour of the school indicates that it needs maintenance, better furnishings [desks in disrepair] and the library could use more books, not just any books, but quality books. 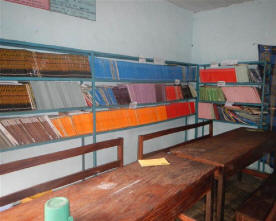 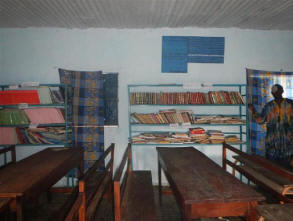 This Senior Secondary library was started by one organization, but completed by USAID. USAID is not doing any more libraries. However, Peace Corps seems to be developing them (as witnessed in Jappineh). (Me: to investigate the country/govt. opinion on library development and that of NGOs)

A huge support to his school, he indicated, would be teacher capacity building – give them more training on “child centered delivery”. I asked what he meant and he said to involve the child in his/her learning rather than dictate the lessons through continuous lecture and rote memorization. He said a group called FAWEGAM has done this training before for schools and has found it very effective. (Me: to investigate the FAWEGAM program, outcomes and funders).

The art department appeared to be doing well although the art teacher asked how he could obtain more materials.  The projects by the students had just been scored by the examination staff so they were all laid out on tables in the art classroom.  A sample of the projects are below.  The top two are student embroideries.  Below is a painting on glass. 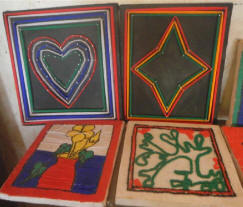 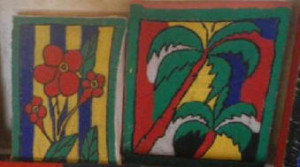 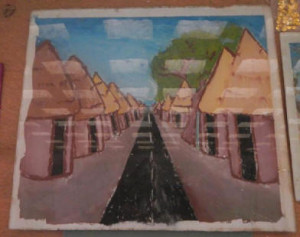