Well, we did make the news last night!  Essa didn’t have electricity last night so he didn’t even see it. The piece didn’t use my name but called me Binta, my Gambian name. They also highlighted University District Rotary.  Fortunately we had made a banner with GambiaHELP on it that showed in the presentation.

Anyway, it was a good piece.  I guess I am so integrated with the community now that my American name doesn’t matter anymore. I plan to ask for a tape of the news segment which is about 4 minutes long. 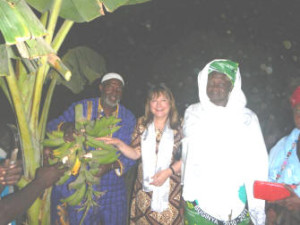 Also, at the handing over, Essa’s mother cut two of her banana trees down and had them stuck in the ground at the handing over site. As part of the program I had to help cut down the banana bunches with a member of women’s group and with my Toma, Binta Badjie.

It was a first for me and I asked Essa what it was all about.  He said it means that the relationship is “natural” for no other reason than love for one another, the purest form of a relationship. It made me feel good.

This is a picture of Kadysa and I and then the banana man who helped hold the tree.

A Toma is someone you are named after – it is a real honor and reflects the rearing, grace and all the qualities of typically the older person you represent – the name is given to you because f a relationship and those qualities that are transferred to you as representative of the Toma are for you to uphold and honor. It is a good way to socially control behavior.  Your shame is shame onto the Toma as well. To honor her, you honor yourself.

Below is a copy of the news presentation: